For the global aeronautical industry, China represents the largest commercial opportunity of the coming 10 years, and the biggest competitive threat for the decades to follow. Arthur D. Little reviews the development of the Chinese aeronautical industry, which recently accelerated with the creation of COMAC and AECC, and identifies the key aspects to be closely monitored by Western players.

1. China wants to leverage its growing domestic demand to become a global leader in commercial airplanes

The Chinese aeronautical market is booming. According to Airbus and Boeing, China will account for 17% of the 40,000 global airplane deliveries expected during the next 20 years. It is considered the largest market, valued at 1 trillion US$ cumulatively. 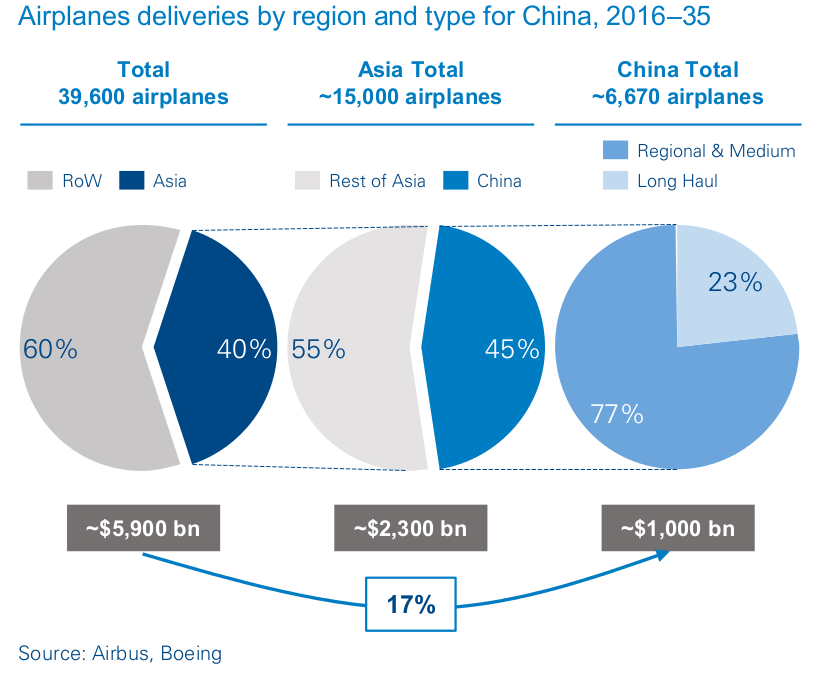 The Chinese government decided to structure a domestic commercial-aircraft manufacturing industry capable of reducing its dependency on foreign suppliers and, in the long term, of competing with established OEMs on a global scale.

Thanks to massive governmental support, the Chinese aeronautical industry is progressively emerging, centered on AVIC and COMAC

Between the 1950s and the early 1980s, the Chinese aeronautical industry mainly focused on the development of military aircraft and a few unsuccessful attempts at manufacturing commercial jet aircraft (e.g., Shanghai Y-10).

In 1985, the partnership established with McDonnell Douglas represented a major turning point, accelerating the Chinese industry’s learning process through the joint manufacturing of the MD-82.

In parallel with developing COMAC as the domestic OEM, the Chinese government invested in building a local supply chain and requested Western players that were willing to capture contracts in China to partner with the local industry, operating transfers of know-how and technologies.

The first results of this strategy are visible in the aerostructures market, where AVIC has developed into a leading tier-1 supplier to all major OEMs. On top of aerostructures, the Chinese government recently started to invest in Aero Engine Corp. of China (AECC) to develop domestic industrial capabilities for the manufacturing of aircraft engines. To a lesser extent, it also invested in the joint venture between AVIC and GE (AVIAGE Systems) to develop avionics systems.